Mar 7, 2019
HydraV General Manager Yun Xiong accepts an exclusive interview with OFweek Hydrogen
The competition in the lithium battery market has not yet reached the dust, and the competition in the field of hydrogen fuel cells has gradually increased.
Along with the increasingly complete development policies and technical conditions of the domestic hydrogen energy industry, many enterprises that have experienced or witnessed the "wind vent" of lithium batteries have quietly assembled to the hydrogen energy industry. According to incomplete statistics, there are currently more than 30 listed companies involved in the fuel cell industry chain, and Vision Battery is one of the important representatives.
As a domestic lead-acid enterprise, Vision Battery continues to optimize its product structure in the context of continued hot energy in the new energy market. It has successively placed lithium batteries and fuel cells, and gradually formed a “lead acid + lithium battery + fuel cell” troika. Driving business development model.
HydraV, a subsidiary of Vision Battery, is mainly responsible for the fuel cell business of the Group. With the support of the Group, HydraV has accumulated a large amount of energy, and has completed the hydrogen energy industry chain such as hydrogen production, membrane electrode, fuel cell stack, fuel cell engine system and vehicle operation. The layout of key links and the construction of fuel cell industrial parks in Wuhan and Datong.
At the FCEXPO 2019 exhibition, HydraV's 45kW and 60kW fuel cell engine systems attracted a lot of attention from the audience. HydraV General Manager Xiong Yun accepted an exclusive interview with OFweek Hydrogen. The following is a dialogue record:
OFweek Hydrogen: From lead acid to lithium to hydrogen fuel cells, HydraV has become an important part of the transformation of Vision Battery. What is the positioning of HydraV in the Group's headquarters?
Yun Xiong: The positioning and strategic choice of Vision Battery has always been very precise. We mainly export in the lead-acid field, and it is the industry leader in UPS. We started very early in lithium battery, mainly exporting communication power supply; the development direction of hydrogen energy It was gradually determined in 2014, and with our solid electrochemical technology, including talent reserves, experimental equipment and national laboratories, the results of today are only 4-5 years.
HydraV is primarily responsible for the Group's hydrogen-related business and will be the core business unit of the group now and in the future. In the hydrogen energy business, Huanong Zhang , the chairman of the group, led the group's internal executives and core leadership to invest a lot of energy, including investing in NOWOGEN, Hydrogine Technology, and communicating with excellent foreign hydrogen fuel cell providers.
In the future, we will continue to increase investment in the hydrogen energy sector and prepare for sufficient market.
OFweek Hydrogen: HydraV involves a wide range of businesses in the hydrogen energy field. Will the development of the entire industry chain be focused on in the future?
Yun Xiong: In the field of hydrogen energy, HydraV's current hydrogen energy business involves hydrogen refueling stations, upstream materials, engines, and electric reactors. In addition to focusing on industrial value, our other purpose is to demonstrate the operation. The hydrogen energy industry will fall from concept to the field, and then the surrounding operating environment will be promoted to drive the entire industry forward.
In fact, the effect of the demonstration operation is also very gratifying. We have seen more and more people in the past two years have begun to pay attention to the hydrogen energy industry, and some central enterprises are discussing the possibility of cooperation with Vision Battery.
The future business focus of HydraV will still be biased towards the reactor and engine system, which will be our two main focuses. Other links, such as hydrogen refueling stations, must be done by gas companies. Raw materials are made by material companies, allowing professional people to do professional things. Of course, in this process, we will also actively seek benign cooperation in the industrial chain.
OFweek Hydrogen: What is the core competency of HydarV?
Yun Xiong: It is mainly embodied in two products. First, it has independent research and development and is the largest membrane electrode product in the world. This year our membrane electrode production capacity will be close to a million pieces, which can cover the total export volume for one year.
The second is the fuel cell engine system independently developed by Vision Battery. In 2018, our self-developed fuel cell engine production line was officially put into operation. It is expected that the reactor production line within HydraV 30kW will be put into operation at the latest in September this year. The follow-up will be directly tested on the train, and a large amount of real operational data will be collected by accumulating industrial resources. And continue to upgrade the product.
OFweek Hydrogen: How will the relationship between HydraV and its invested fuel cell company, such as NOWOGEN, be defined in the context of the main fuel cell positioning?
Yun Xiong: NOWOGEN is a domestic company specializing in the research and development of electric stacks. We can support it more than the outside world. Future Vision Battery hopes to be a strategic partnership with NOWOGEN.
Because now everyone is basically on the same starting line, and the fuel cell is a trillion-dollar market, the broad market space means that every company will have plenty of room to play, and the relationship with NOWOGEN will have cooperation and competition in the future. Good competition will motivate the two companies to maintain their leading position in the industry.
OFweek Hydrogen: How is the development of HydraV fuel cells going?
Yun Xiong: At this exhibition, we brought a 45kW fuel cell engine system with a product volume of 118L, a rated current of 320, a rated voltage of 130-260V, a volumetric specific power density of 381W/L, and a mass ratio power density of 401W/kg. 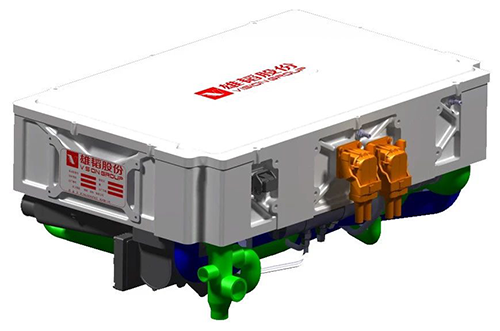 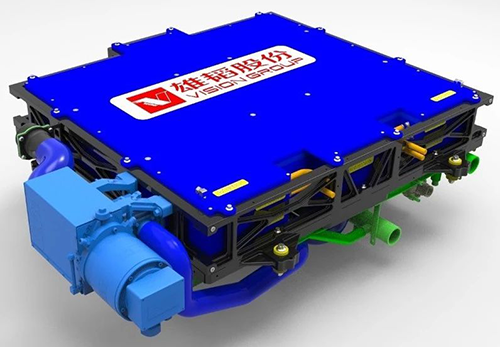 The reactor product is currently undergoing performance equipment experiments. The metal version of the 60kW stack has begun life testing, and the graphite board reactor begins trial production.
OFweek Hydrogen: How to lay out the next automotive market products?
Yun Xiong: We will carry out a three-step strategy in terms of products. First, it continues to strengthen Vision Battery's commercial vehicle market. It is expected that about ten commercial vehicles equipped with HydraV fuel cell systems will be on the bulletin catalog this year.
Secondly, we will support some logistics models. It is expected that this year's breakthrough in the field of logistics vehicles may surpass commercial vehicles.
The third is to lay out the layout on passenger cars, public machines and special vehicles. The relevant planning is already under preparation, and the next period will be further paved.